Mistress Suzan wanted to puke on this guy. But instead of gagging herself so that she could puke on him, she chose to shit on him. She fed him her shit using her b bare hands. She even had him lick her fingers. And the image was revolting even for her and she puked on him. She ordered him to lick the puke and he did so without any questions. 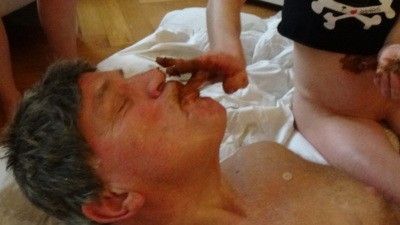